A Taste of Scotland 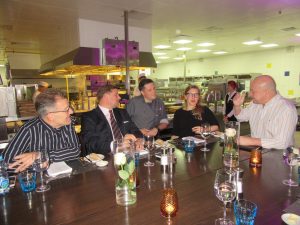 Reserve your ticket for a feast of Scottish goodness

We can confirm from a recent tasting organised by our friends at the Warsaw Marriott Hotel that there is a fantastic dinner menu lined up for guests at the St Andrew’s Caledonian Charity Ball which is being held on Saturday 25 November 2017. Don’t miss out – reserve your ticket now.

At the tasting, arranged by the Marriott’s Monika Łączynska and hosted by Executive Chef Paweł Kałuski, we had a preview of the dishes planned for the Ball and we can say without reservation that we and the guests at the Ball can expect a a taste of Scotland and a feast of goodness!

The four course dinner will begin with a popular Scottish soup, followed by a starter of haggis, a choice of main courses – beef or cod – and an absolutely scrumptious dessert featuring whisky and chocolate!  The dinner will be accompanied by some fine wines, and for those wanting something stronger, whisky and vodka!

Again this year there will be an early bird breakfast featuring Scottish potato scones, Lorne sausage and other favourites.

Reserve your ticket – we have a few places remaining

If the food is tempting and you haven’t booked your seats, we have a few tickets remaining which will be released on a first come, first served basis (reserve your ticket here).  We not only have some excellent food, but you can also expect:

Don’t miss out on one of Warsaw’s best nights out – reserve your tickets now.

Do NOT follow this link or you will be banned from the site!
We use cookies to ensure that we give you the best experience on our website. If you continue to use this site we will assume that you are happy with it.OkPrivacy Policy